It's Thursday and time to welcome another guest to my blog. So pull up a chair and relax while the delicious Molly Synthia talks about one of her favourite subjects. Erotica. Take it away, Molly.

The Importance of Erotica
Boy, oh boy; importance just sounds like a pompous word to use, doesn’t it?  Like we erotica authors are just standing around fighting for recognition as legitimate authors and we deserve to be thought of as such.  Still, I rack my brain trying to come up with a better word, and I just can’t.  Significancemight work because there is significance to both good and bad erotica, but it just doesn’t work for me.  I think I chose the right word for this title, and I think there are good reasons to think of erotica as more than wanking material.  For this particular post, I’ll be talking about two of them.  There are many more, but I’m going to focus on two that mean something to me.
1)      Erotica is honest.

No, I’m not saying that erotica is realistic.  Listen, we don’t order pizza and fuck the delivery boy every single time.  Doctors don’t view every patient as a potential sexual conquest.  Every babysitter isn’t a horny girl just waiting for a husband, a wife, or both to bend her over the couch and take her with a fury.  There’s no way half of all sex is gangbangs, threesomes, and wife swaps; and the other half isn’t composed mostly of girl on girl or boy on girl encounters.  The reality is that most sex in our world is between heterosexual couples, and it’s fairly boring in terms of fantasy.

But there’s the rub (pun intended—you can guess where I’m rubbing.)  It’s not that the sex described is realistic.  I interviewed an author once who pointed out that although the characters in her stories experienced rough gangbangs that pushed their limits, if she were suddenly confronted with six hard cocks, she’d run screaming from the room in terror.  Nonetheless, she fantasized about it.  That’s what erotica is, fantasy.  It’s not that the sex within does happen, it’s that we all think about it.  We all imagine these kinds of scenarios that would likely in real life never happen to us.  Look up the top ten fantasies for women on Google.  You’ll discover they’re all hot as hell, and you’re not likely to want to actually experience more than one or two of them.

But erotica is honest because it expresses the fantasies.  It’s an honest look at the what if in regards to our sex lives.  Look, I’ve been through most of the Kama Sutra with my man.  Can I tell you something?  Most of the positions suck.  They’re uncomfortable and they just don’t do anything for me or him.  God, they look awesome on paper or in terra cotta sculptures.  Give me reverse cowgirl any day.  Still, looking at them and experimenting with my man is wonderful.  Even lying underneath him and imagining nine or ten men in the room waiting until they’re up to the plate is a big turn on.

But it’s fantasy.  It’s an honest fantasy.  Erotica is as well.  It’s all about a safe way to explore what most will never explore in reality.
2)      Erotica can help couples.

We tend to believe erotica is a solo act, a masturbatory extravaganza of sexual joy.  Okay, it’s wonderful just like that, but there are a number of elements about it that can help you spice up your relationship. There’s something incredibly intimate about reading aloud. Watch a sexy movie together, sure, but that’s far more one sided.  Research (and Larry Flint) tells us that women tend to be aroused by words and word pictures.  So, erotica tends to turn women on far more than watching an Italian stud give it to a Brazilian beauty. So, the stories will do better than the videos for a girl.  Research also says that for a man, auditory stimulation is almost as powerful as visual stimulation.  Why do you think they love it so much when we talk dirty and moan?  When you read erotica aloud to each other, the sparks are sure to fly. 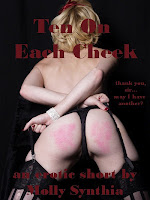 There you go, the Molly Synthia view of erotica in brief.  I’ve been writing it for years, primarily ghostwriting.  A while ago, I bought out one of my clients, and now I own Mmmmore Productions.  We produce hardcore, explicit erotica with no apologies.  Isn’t that how it should be?  I don’t mean the hardcore or the explicit so much as I mean the refusal to apologize.  If mainstream writers can produce the same story over and over with different names for the bad guys and the heroes, why can’t we do the same with something that is a hell of a lot more relevant to humanity?  After all, the likelihood of you ever meeting a serial killer, a wizard, an alien, an evil corporation, a corrupt dictator, or a Special Forces black ops killing machine this year is absurdly low.  The likelihood you’ll have sex during that time is pretty certain.
Remember, grab life by the balls because you never know what might cum of it!
Here is an excerpt from Coffee Shop Girl

In fact, on a soft Tuesday morning, the day after our arrival in San Angelo, I sat in another coffee shop location waiting for the barista to call out “Rose” to announce that my drink was ready and contemplated potential excuses for a return to Flagstaff. We’d bypassed the Grand Canyon because of holiday events that were expected to fill the park to bursting and neither Clarence nor I trusted ourselves to keep hold of our eight year old in the midst of a crowd. Still, we’d both been relieved to avoid bringing five children anywhere near that ledge and such an excuse wouldn’t work. Clarence was in the RV typing his latest masterpiece, and the kids still slept, so I sat alone in the shop with warmth between my legs that still remained in memory of Clarence’s fingers within me and the lingering taste of his culmination on my tongue. I closed my eyes as I recalled the swelling before he finished and the expected shock as he spurted into my mouth while I was lost in my own orgasm imagining it was she whose cheeks bulged when he cried out at the end.
My eyes were closed when I heard her voice, and I silently mouthed her order, grande drip with a shot of hazelnut and half and half. My eyes flew open when I realized the voice wasn’t just a particularly vivid phantom from my memory, and just as I heard my name on the lips of the young man holding my drink, I saw her standing at the counter. Her hair was just as gold and set off more by the navy tee shirt she wore tucked into tight, bleached jeans that accentuated her legs and her ass even more than the shorts she’d worn in Flagstaff. I stared unabashedly until the barista called me again and I jumped up, nearly stumbling on my way to the counter. I couldn’t take my eyes off her, and when she carried her coffee toward the door, she stopped and stared back. I felt my face flush with embarrassment and a sudden heart-pounding fear, but she walked up to me and said, “Do I know you?”
That's great honey, you really know your subject. I can vouch for that book too, it's a great read from beginning to end. So glad you dropped by. Now what can I get you ...?
*****************************************
Posted by Naomi Shaw at 09:06