Today’s shout out is for the wonderful writer Phoenix Johnson. I’m a big admirer of her writing and am sure many others are too. Hey Phoenix, tell us about the writer in you and your work.
Thanks Naomi.
First of all, some information about Phoenix, the writer. 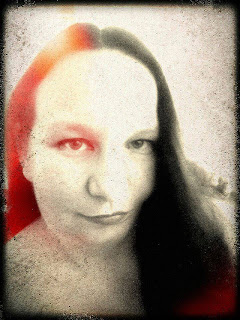 Phoenix Johnson is an Australian author who has always had the passion for the written word. She had her nose in at least one book ever since she could read and would even scrutinize the back of the cereal box every morning at breakfast. It was only natural she take up writing.
Phoenix has multiple works in progress, and her favourite writing genres are the same as her reading genres; erotica, romance, paranormal, thriller and a combination of these. The Wolf in the Neighborhood, book one in her debut trilogy Wolf Smitten, was released January 15 2013.
She currently lives in a small rural town west of Ipswich, Queensland, with her partner, their daughter and a Siamese Fighting Fish, Cranky.
Where to find me when I’m writing
Facebook
Facebook
Blog
Twitter
Pinterest
Website
Tumblr
Youtube
Now some info about The Wolf in the Neighborhood.
About The Wolf 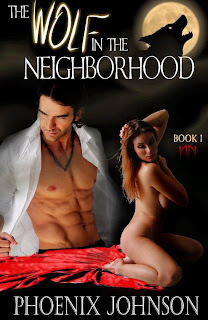 What do you do when your past comes back to haunt you?
Could a dark secret revealed by a new lover be something you could overlook just to have him?
What kind of secrets could you learn to live with for true love?
Krissy has a hunky new neighbor with a dark secret; Derek is a vet with an interesting past. They hit it off quickly but when Krissy’s abusive ex, James comes back in to her life, Derek shows a side Krissy never could have guessed. However, James refuses to give up. Can Derek’s secret save them, or will James have his revenge?
Available in Mobi, ePub and PDF through NNP. Also available at Amazon, Amazon UK, Smashwords, Barnes & Noble and Apple.
Any chance of an excerpt? Pretty please.
The Wolf in the Neighborhood Excerpt
Krissy jotted down a quick note in case Derek woke up, grabbed her bag from where it had been thrown before, and had almost walked out the door when she remembered her torn clothes. It was tempting to have a shower to wash away where James had touched her but she settled for grabbing some clean clothes from a basket by the couch, waiting to be folded, before checking her cheek in the mirror. There was no bruising yet, but she knew there would be a dark smudge there tomorrow.
Heaving a sigh, she walked out the door before she let it get to her. There would be time to think on those events later. For now she had pizza toppings and a bottle of wine to get. Locking the door behind her, she headed downstairs.
Upon reaching the lobby, she was reminded that she should tell Mike about James so she walked towards the large man, who straightened up as she approached and gave her a schoolboy smile.
Not on your life, Mike; you’re way too for bulky my tastes.
It wasn’t that the man was fat – far from it. He was just rather tall and built like a brick house. She figured him for ex-military, though what he was doing stuck as a doorman was beyond her.
Krissy raised her eyebrow as she stood on the other side of the desk, waiting until his moronic grin faded and he was paying attention to her words, not just her body. She usually didn’t mind his grins and innuendos, the rare times that they saw each other; today, however, she was in no mood since it had been him who allowed James to enter the building.
She had to remind herself that it wasn’t his fault – he didn’t know about James; taking a deep breath that had him almost drooling again, she spoke: “Mike, did you see a tall man come downstairs? He probably looked a bit… pale.” She decided not to say too much, in case he asked questions. She had too many unanswered questions of her own; there was no way she could answer his.
Mike startled her with a deep chortle. “Yeah, that’s an understatement! He came barreling down the stairs gibbering something about a wolf-man – which is outrageous – and he’d pissed his pants!”
Well, at least I know he won’t ask many questions.
“That would be James. Look, I’d like to ask that you don’t let him in here in the future, should he decide to come back, and if you see him lingering around at all, let me know.” When Mike started to look guilty, she interrupted anything he was about to say. “Don’t worry about it this time. I should have checked that Eddie told you. James is my ex, and I’m not at all interested in seeing him again.”
“Sure thing, Miss Krissy; I will keep my eyes out for him.” He looked like he wanted to salute, which brought a slight smile to her face. She reached over the counter to touch his large hand, chasing away any lingering guilt he might have for his slip up.
“Thank you, Mike. It means a lot that I have such a faithful protector down here. Now, I have to go buy some groceries.” Having said all she needed to say, Krissy turned and walked out, once again not minding that he was watching her hips sway and skirt swish as she left him behind the counter.
********************************************
Wow! I think you had better give us the buy links for the interest drummed up. Great going, Phoenix!
Buy Links
Naughty Nights Press
Amazon: Amazon.com
Amazon UK: Amazon.co.uk
Smashwords: Smashwords
Barnes & Noble: Barnes and Noble
Thanks for popping round hon, hope you get loads of sales. And you are welcome anytime J
Posted by Naomi Shaw at 08:30