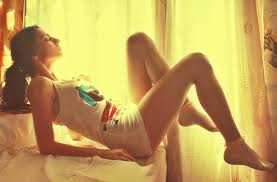 The day felt hot and sticky. Clare had a cool shower then dressed in a thin dress. She turned a fan on to try and get cool but to no avail so thought as she had no garden she may as well sun herself by the window.

Clare hitched herself up on the edge of the bed and sat leaning back. The sun streamed through the open window and although the nets were a shield, she could still feel the fierce heat on her body.
She closed her eyes and thought of Darren. He was the latest employee where she worked. He was an old flame of hers and she still held a torch, but had a feeling he was avoiding her.
The cotton shift dress she was wearing rode right up exposing her legs. With bent knees, she lifted and parted them. Heat on her crotch aroused her. Clare moaned, wishing it were Darren between them again.


a Rafflecopter giveaway
congratulations go to sdlashbrook
Posted by Naomi Shaw at 10:28