Today sees a shout out for the highly talented Cree Walker. She has written a really gripping book called Maple Lane Manor, Home for Retired Supernaturals. Believe me once you start reading you won’t want to stop. Cree has been kind enough to let you read Chapter one here. Thank you so much Cree. I wish you tons of success with it. I know I will be buying. 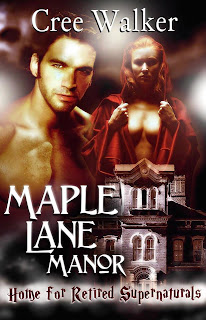 Maple Lane returns to the retirement home where she grew up, after ten years away, and must face the music. How can she rebuild the dilapidated building, repay a massive mortgage, and restore her residents’ faith in her with her arch-nemesis – Stacy Three Names – breathing down her neck, hungry for an artifact said to grant immortality? As Stacy sabotages Maple’s efforts, the gorgeous new handyman Derek complicates matters with his demon blood and hot attraction.
How can Maple and her residents fight Stacy, find the artefact, and save their home with the rich and powerful of the town arrayed against them?
…And can she trust a demon to help her?
Chapter One