Today’s Shout Out is for Sherri Hayes, an amazing writer and her latest book, Red Zone. Sherri has kindly allowed us to read an excerpt which I am sure will tempt some into buying.
Blurb: 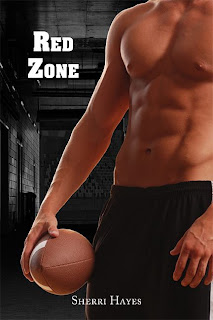 After a case ended badly for Rebecca Carson, she’s losing her mind sitting around her apartment waiting on her superiors to allow her to return to work. Since she was a teenager, the only thing she’d ever wanted was to join the FBI. Now that dream was in danger.
Gage Daniels has made a pretty good life for himself. A nice house. A career he loves. As a professional football player, he’s used to getting almost everything he’d ever want with just the snap of his fingers. This includes women. A well-timed smile is usually all it takes to attract the opposite sex, especially in Nashville.
When a stalker threatens Gage, the team owner calls an old friend, Rebecca’s ex-partner Travis Hansen, to help protect his star quarterback and find the person responsible. Hansen offers Rebecca the job, and she jumps at the chance. It’s work, and it will get her out of her apartment. How bad can it be?
Posing as Gage’s girlfriend, however, isn’t as easy as it seems. The man is relentless. Rebecca must work to protect Gage while staving off his advances. She’s there to do a job, nothing more. The last thing she wants is to be another notch on a hotshot athlete’s belt.
As the stalker continues to up the ante, Rebecca finds it harder and harder to keep her distance from Nashville’s star quarterback. He isn’t what she expected in one of the city’s most notorious playboys. Now all she has to do is keep him safe until they can find his stalker, and hope she doesn’t lose her heart in the process.
Excerpt:
His weight rested on top of her as he held her face between his hands and stared down at her. “You are so beautiful, Rebecca.”
When his lips met hers again, they were more gentle but no less potent. What had before been a building inferno was now a slow burn. She wasn’t sure which was worse . . . or better. Every lick of his tongue, every nip of his teeth, sent her body screaming for more of him.
She ran her hands along his back, urging him, pleading with him, to go faster, kiss her harder. When that didn’t work, she wrapped her legs around his waist, lifting her hips to brush against him, hoping that once he felt her urgency, her need, he’d do something about it.
He groaned but still refused to pick up the pace.
Finally, she had enough. She needed more. Using her self-defense knowledge, she took hold of his wrists. Exerting an exact amount of force on his pressure points forced him to release his grip on her. The moment she was free, she bucked her hips, and twisted. The result had her freed from his hold and him lying bewildered beside her.
Rebecca immediately climbed on top of him. “What—”
She cut him off with a hard kiss.
“I’ve had enough of slow.”
Looks like a great book doesn’t it. Here are all the links.
The Writers Coffee Shop
Amazon.com
Barnes and Noble
Kobo
itunes preview
Sherri Hayes
Website
Youtube
*******************************************************************
Posted by Naomi Shaw at 08:24