It is my very great pleasure today to have the wonderfully talented writer here to talk about her life and writing. She's a lovely lady, so without further ado, please give a warm welcome to  my friend Dianne Hartsock. 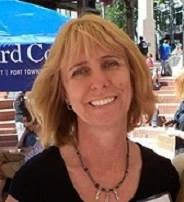 Thanks for having me as your guest today, Naomi! Most of my stories are m/m romance or m/m erotic romance, covering every subgenre you can think of. But the way I think my stories differ from others, is that I'm all about emotion. No matter what situations they find themselves in, I want to climb right into my character's skin, dive into his soul, feel every sensation and emotion as he's experiencing it. It's an intimate, personal relationship I hope my readers will enjoy.
My stories are all about true love and the happy endings. I absolutely adore bringing out the gentleness in a strong man, the moments of tenderness, heartache and joys. I think becoming so intimate with my characters has helped me understand the many facets of love much better than I used to.
My inspiration is usually a bit of music or a magazine picture or something on TV, even a customer at work will catch my interest, the men who come in to buy flowers for their special someone. They always use a soft voice, gentle smile, and have a certain look in their eyes. I can tell the flowers really mean something to them. They're in love and want to show it. I always hold this in my mind when I write my love scenes. But I do admit that love itself is my biggest inspiration. To me love is the movement of bodies in the darkness. The clasp of a hand in a crowd of strangers. Dinner and a mindless show on TV after work. The note at lunchtime, just because he missed me.
Then again, what is love without the scorching flash of lust when he walks into the room? Those oh, so snug jeans he's wearing you want to tear from his hips to get at the treasures beneath. You lick your lips, wanting the slide of hot, hard flesh in your mouth.
And what of our hidden desires, the one's we keep secreted away in our darkest fantasies? Those cute young men who do the lawn next door you want in your bed? The waiter you want on his knees, bound and blindfolded. Or the grocery clerk you want to drag in the back room, whose plump red lips, ripe as the strawberries he's displaying, you want on your body driving you mad with pleasure.
We all have our secret desires, but if given the chance, would we really act on them? Or would we keep them hidden safely away, only taking them out to play in our dreams? In my story STUCK ON REWIND, Ashton has a wild desire for his best friend Lance, but can he get up his courage to tell him he wants him spread-eagled naked on his bed RIGHT NOW! Trey too, if that's what it takes for Lance to come to him.
But it's never that easy, is it? Ashton has to struggle for his happily ever after, just as we all do. Lance is the gorgeous erotic dancer at the gay club where they both work. Ashton has to watch him night after night dancing for other men, sometimes even leaving afterwards with someone new. And though he wants to keep Lance home dancing only for him, he knows Lance was made to dance and he could never ask him to give that up.
Stuck on Rewind 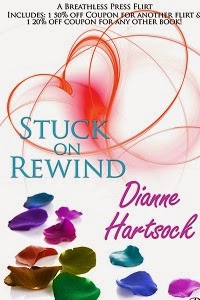 Blurb
Can Ashton let go of his jealousy and be the friend and lover that Lance needs?
Ashton has been in love with his best friend for years, watching him grow from a pretty high school boy to the gorgeous erotic dancer at the club where they both work. The problem is that Lance enjoys the attention of a variety of men while Ashton wants him for his very own.
After a day spent denying his attraction for Lance, standing by while their friend Trey openly flirts with him, Ashton decides it's time to make his move or risk losing his man forever. Once Lance knows how he feels he'll realize they should be together. Or is it already too late ?
Excerpt
"Fuck!" Ashton shouted, a mixture of anger and ecstasy as Lance swallowed again, then let his softening cock slip from between his perfect lips. Ashton leaned on his elbows, his chest heaving while he caught his breath. With a last kiss on his thigh, Lance climbed off the bed, sleek limbed and graceful, and walked to the dresser with a sassy sway of his hips.
Ashton stared after him and moaned, not sure if he wanted to pull his friend's ass back into his arms or punch him in the face. It would be incredible to wake up with Lance every morning and make love to him. But he sternly reminded himself that they were only friends and Lance needed to stop climbing into his bed at night uninvited.
"You do remember you have a bed of your own?" he asked more sharply than he'd intended.
Lance gave him a smirk over his shoulder, making a show of licking the last of Ashton's spunk off his swollen lips. "You told me to wake you at seven."
"I didn't mean... Oh hell." Ashton fell back on the pillows and threw an arm over his eyes. He swore in exasperation when the mattress dipped and Lance's familiar scent surrounded him. "Dammit—"
Soft fingers touched his mouth. "Don't be mad, baby. I didn't mean anything."
Ashton peered at him. The guy looked positively forlorn, and Ashton sat up, giving him a one-armed hug. "I'm not mad. But you don't need to keep doing that, either. You're my friend!" He kissed the blushing cheek beside him. "You make a terrific roommate, and I like the company."
"And I like you." Lance walked his fingers up Ashton's leg.
Ashton laughed and shooed the hand away, but couldn't help staring at the enticing evidence of his friend's arousal between his legs.
"Can I take care of that for you?"
"Not at all." Lance stood up, waving off Ashton's offer. "I'll deal with it in the shower. You have to save your attentions for Mister Man."
"Who are you talking about...? Wait!" Ashton rolled off the bed and trotted after Lance as he crossed the apartment.
Lance giggled, slipping behind the bathroom door but holding it cracked an inch. He smiled at Ashton with his pouty, kissable lips. "You know, the boss. Mister Kent."
"I'm not saving myself for—"
Ashton blinked at the closed door. Why in the world would Lance think he was interested in his boss? Sure, the man was handsome as sin, but he was also an egomaniac and tyrant. Why only yesterday, he'd...
Hot blood scorched Ashton's neck and face, his arm tingling where Morgan Kent had gripped it, towering over him. The man had bent to his ear, swamping Ashton's senses with subtle cologne and the hint of sweat as he whispered, "If you can't type a simple letter without mistakes, I'll find a secretary who can." He tightened his hand almost painfully on Ashton's arm. "Or maybe I should just bend you over this desk and smack your ass for each mistake?"
Ashton's dick jumped at the memory. He told it sternly to behave. "We're not falling for that bastard. We'll stick with the sweet boys at the club and call it good."
ARe Books
Amazon
Breathless Press
Well, I'm hooked. Looks like a great book. I wish you all the best with it, and please pop round anytime.
Posted by Naomi Shaw at 07:04