Sexy Snippets are seven sentences from a book or WIP, posted on a Sunday. This week my snippet carries on from last week, a scene from a WIP The Locket. More about Sonia alone with Jake in the mens room after Sonia, a secretary, but not his, followed him there. Enjoy. Then please follow the links and show some love to the others. 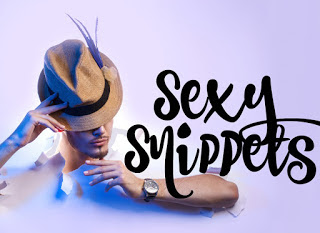 Jake watched Sonia edge nearer to him. The heady aroma of her perfume filled his head and started playing havoc with his senses. “Bad girl,” he growled, knowing this was wrong and yet unable to resist the situation.

He pressed one hand into the small of her back, and drew Sonia close up against him, her ample breasts heaving against his chest. Then, cupping the back of Sonia's head with the other hand, Jake tilted it slightly.

With a fiery passion, Jake nibbled on her bottom lip and pressed his lips against hers with short hot kisses that almost bruised her lips. Briefly pausing, catching his breath, he carressed her bum, bunching her skirt up and exposing her suspenders.