I feel privileged to have as my guest today Doris O'Connor. I was so pleased when she took up the invitation to visit and talk about her latest book, 'Mr Satisfaction Guaranteed'. This is a book that anyone who enjoys erotica can not pass by. Doris is a really talented author, believe me.

So Doris. Don't sit in the shadows girl, the limelight is yours!

I can feel my head swelling with that intro lol. Ah well, you asked and now I'm a tellin.

Never say never…
That saying is clichéd to be sure, but it's also correct. I should know. You're looking at the writer who was never going to … gasp … write erotic stuff. Oh no. goodness me no, not me, no siree. Not so long ago, I fumbled and cringed my way through writing sex scenes. In fact I needed help writing my very first sex scene.
It was a bit dire, and awkward, and just not pretty.
However, there is another saying—Practice makes perfect.
When you're a panster like me, and you have these darn characters that just cannot keep their hands off each other, there comes a point where you just have to let go of your preconceived notions and go with the flow, or the rising body parts as the case may be.
*wink*
Once, I pulled up my big girl panties, and stopped resisting what my characters were telling me to do, a funny thing happened. My writing got hotter and hotter, and nowadays the sex scenes are my favourite scenes to write.
M/F, M/F/M, F/F/F, and F/F, not a problem, but I still could never see myself writing M/M. That silly word again—never.
My heroine Natasha had other ideas, however, and when she books the escort services of Mr. Satisfaction Guaranteed, all sorts of deliciously naughty things start to happen. This is book two in this very naughty BDSM series.  You can pick the original Mr. Satisfaction Guaranteed up for free here.
http://www.evernightpublishing.com/mr-satisfaction-guaranteed-by-doris-oconnor/
In this second installment we have some m/m action and some m/f/m play, spanking, bondage, and some public exhibition and inappropriate use of raspberries.
Have I got you intrigued yet?
Mr. Satisfaction Guaranteed released March 13th with Evernight Publishing.
BUYLINK: http://www.evernightpublishing.com/ 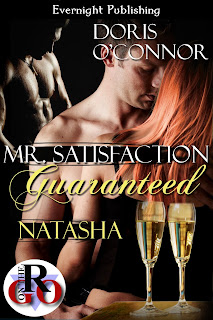 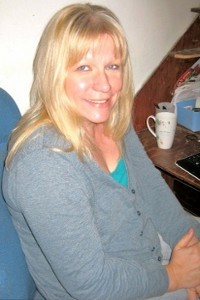 Author Bio:
Glutton for punishment would be a good description for Doris... at least that's what she hears on an almost daily basis when people find out that she has a brood of nine children, ranging from adult to toddler and lives happily in a far too small house, cluttered with children, pets, dust bunnies, and one very understanding and supportive husband. Domestic goddess she is not.
There is always something better to do after all, like working on the latest manuscript and trying not to scare the locals even more than usual by talking out loud to the voices in her head. Her characters tend to be pretty insistent to get their stories told, and you will find Doris burning the midnight oil on a regular basis. Only time to get any peace and quiet and besides, sleep is for wimps.
She likes to spin sensual, sassy, and sexy tales involving alpha heroes to die for, and heroines who give as good as they get. From contemporary to paranormal, BDSM to F/F, and Ménage and haunting love stories guaranteed.
STALKING LINKS:
Evernight
Amazon
All Romance
Bookstrand
Many thanks for having me.
You know it's my pleasure, any time. I wish you the best of success with this book.
Posted by Naomi Shaw at 07:30