I'm really happy to see Angelica Dawson here today . A really good friend and wonderful writer, she hasn't been here for a while so I hope along with me  you will make her welcome. She's here to talk about her latest release which she's rather excited about. I'm sure you will be too. So without further ado, here she is to tell you about it. *Gives Angelica the microphone*.


Angelica Dawson is the author of Blue Moon House, which has been in the top ten best-selling titles at Naughty Nights Press for over six months. She has also written two short stories, “The Highest Bidder” and “Leave Taking” which were each included in anthologies.

She contributes flash fiction to several blogging collectives and excerpts from work in progress can also be found on her blog. She is active on

Her latest story is called Gentleman.


In the third installment of her Blue Moon House series, Angelica continues to push her characters outside their comfort zones and gets right to the heart of their needs. You can find Gentleman at

For the month of January, you can also pick up the original Blue Moon House  for only $0.99

And so, on to Gentleman 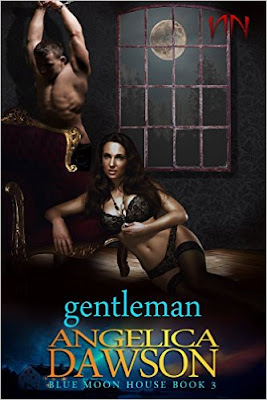 Harrold lives an empty life. He has no joy in his marriage, no love of his work. His only reprieve is found at the hands of the whores, the ones he pays to beat and debase him. Upon being accepted into Blue Moon House, he learns the real cost for his desires, and what underlying need is really aching to be filled.


He was unprepared for his second slap of the evening, this from his wife. After landing the blow, she took his arm and pulled him toward the entry. She started her tirade there in a series of whispers.

“I can't believe you just left. If I didn't know your mother, I'd think she'd raised you in a barn. Honestly, I can accept the widow. That's business.” Apparently Veronica had taken notice of Lynn at some point. He could have sworn she was engaged when Lynn withdrew. Once they were in the carriage her voice rose to full volume. “But a whore, Harrold? In the Baskins' house. Do you have any idea how you embarrassed me? I couldn't care less how often you frequent them or what vile things you do with them, but as a guest?”

Veronica's shrill voice had never appealed to him, but her tone, the way she berated him. God help him, it made him want her. For the first time in a long time.

He sank to the floor of the carriage, taking her hands and holding them to his forehead. “Forgive me. Tell me what I must do?”

“Do?” she asked, confused and snatching her hands back. “Whatever do you mean? Get up. Sit like a man.”

He rose, but longed to continue where her command had taken him. He sat beside her, his hand holding her breast and thumb circling above her corset. “Tell me what you want,” he murmured in her ear, nibbling the lobe.
She nudged him with her shoulder to push him away. “I'll ask you not to treat me as one of your ladies of the night.”

Harrold exited the carriage first, offering Veronica his hand. He kept hold when she was on the ground, breathing into her ear again. “What of our room? Can I appease you there?”
“Are you mad? I've had you tear me open quite enough, thank you.” Snatching her hand back, she hurried into the house.

There had to be a way out.


This sounds a great book Angelica! I hope it sells loads and gets on the bestseller list!