Today I am lucky enough to have my dear friend Pablo Michaels come round to visit. It's been a while since he last visited and always a pleasure to see him. You will recognize him better as the very talented author who also writes in several flash fiction groups. He can be followed on his website blog

He usually writes M/M and his latest book falls into the Paranormal category. It has not long been released but I have a feeling it will be a howling success(pardon the pun). 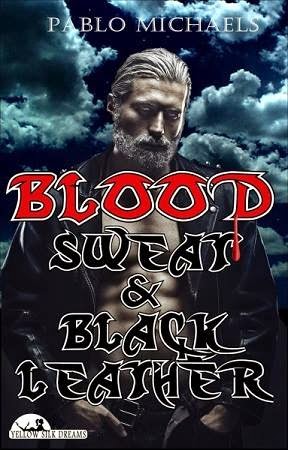 Damien Lieberman has moved back to his parent’s house after they were killed in an automobile accident. A rare typhoon is poised to strike the San Francisco Bay Area on All Hallow’s Eve. Damien wants to return to the city to rekindle his relationship with David Wilder after breaking their vow of monogamy, but Damien has lost his job. After continuous rejections from David, Damien seeks love with a new man, futilely, while gay men are dying from a new disease, AIDS.
While Damien observes the approaching storm from the terrace of the house, dwelling on his past failures and current woes, a man, from Damien’s past, balances magically on the railing of the fence and jumps to the deck next to Damien. He recognizes this stranger as a man he pursued, while David was building a new relationship with another man. It was Gabriel. Overwhelmed with his youthful beauty and strength for a man equal in age to himself, Damien fails to notice – Gabriel Tivoli’s paranormal powers. Damien has not only lost his youthful physical appearance but he has lost optimism and his "Peter Pan" personality, something Gabriel loved when they first met.
Gabriel promises to restore Damien’s youth, beauty and love eternally, if he promises to love him in return. When Gabriel asks Damien to meet him in the nearby cemetery at midnight on Halloween, Damien sees Gabriel as his new chance at love. But will the aging gay man attempt to restore his relationship with David? Or will he have faith in Gabriel Tivoli? Will he discover the meaning of the living dead? Will he abuse his paranormal powers and be sentenced to death by the elders?

A gust of wind slapped Damien awake from his wandering thoughts. Jolted from his memory, he became abruptly aware of a tall, dark, masculine figure strolling on the top railing of the garden fence, illuminated by a beam of moonlight. Balancing like a dancer, he gracefully walked toward Damien, his face hidden in the shadows. The unknown person crept closer to the deck, leaping from the fence and over the banister to stand next to him. Dressed in a black leather vest and pants, he stood tall and mighty. His face was concealed by a dark mask.
“Who are you?” Damien gasped in fear.
“You don’t recognize me?” he answered, his deep, soft voice enticing. “You lusted for me several years ago. I told you I wanted an older man. I let you go.”
“How did you walk on the fence like that?”
“It’s all a matter of balance.”
“Why don’t you drop your mask?” Damien’s teeth chattered slightly. “I don’t remember you or your voice.”
A plume of fog surrounded the man momentarily and then dissipated with the wind. Slowly, he removed the mask, revealing a young, pasty white, clean shaven face with bloodshot, piercing, green eyes glowing like emerald gemstones, and long, jet black hair, combed back and shimmering in the fading moonlight. The finely sculpted chest and arms complimented his rippled stomach muscles, all glistening beneath the open vest. It was a man from Damien’s past.
“Is that you, Gabriel?” He couldn’t recall his last name. “How do you appear out of nowhere and do those amazing stunts, like walking on top of the fence?”
“Yes,” he admitted his identity but ignored the last question.
“But why are you here now? You cut me off and disappeared. You told me you wanted an older man.”
Although Damien’s robe was tied shut, he could feel his dick bounce, stiffening at the sight of Gabriel. He clasped his hands together in front of his crotch, attempting to conceal his erection.
“I see you’re still attracted to me. It’s a long story; I will tell you later. Tell me, are you still trying to live the life of Peter Pan?”
Damien tried to better conceal his arousal.
“Please don’t hide your goods. I like the looks of your erection.” The moon shed more light from a passing cloud. Gabriel masked his face again.
Damien untied the belt to his robe, the wind blowing the front open again. His hard-on became more prominent. “I feel old. I can’t get back in shape like I used
to be able to. I want to look younger. I’m losing my hair. Even getting gray hairs on my chest. I don’t understand it. I go to the gym. But look at me. I can’t stand to look at myself in the mirror. I’ve failed with every guy since you rejected me. But there’s something different about you. How did you walk on top of the fence? And you nearly flew from there to the deck. How did you do that?”
“You were in love with someone else. Do you remember the first day we met?” Gabriel spoke louder …

And a little more

Well I hope that's whetted the appetite for readers to rush out and buy. It sounds great!